The Interracial Perspective collection of fabric art scrolls includes experimental extractions and erasures of interracial narratives from the 1800s through the 2000s––inspired by racial tension within Supreme and District court cases and presidential elections, and Jefferies’ own experience with interracial marriage and how this union presents unsaid difficulties about being human in a racial society which is often more about race than about being human––along with streams of consciousness that respond to these narratives.

The Environmental Justice collection of fabric art scrolls includes experimental extractions and erasures of environmental justice narratives from 1979 through present day. The large scroll in this collection includes erasures of six court cases of environmental justice and the artist’s stream of consciousness, Basic Human Rights, in response to these cases and issues.  Each of the six additional scrolls includes the erasure from one case and buttons which loosely hold fabric tags representing names of those involved in the case.  With the use of black lines and erasure on these fabric tags, the absence of names represents not only those involved in the case, but also those unnamed in the issues of environmental injustice and the names of those whose stories may never be told.

The Environmental Justice Interactive fabric art scrolls includes Jefferies’ stream of consciousness, Basic Human Rights, in response to cases and issues of Environmental Justice in this collection and black buttons. The buttons serve as an invitation for the viewer to button on a fabric tag representing a written place or name affected by environmental injustice, the absence of a place or name, or a black line symbolizing a place or name. The buttons loosely hold the fabric tags which may evolve and change over time, and allows for the viewer to interact with the narratives as an active participant in reimagining the narrative.

The Racial Identity fabric art scroll includes an experimental erasure and images of Tommy Jefferies, along with the stream of consciousness, The Weight of a Name, that responds to the narratives of Racial Identity. This scroll is assembled with Tommy’s hoodie, symbolizing stereotypes by race, and an N95 mask, symbolizing disparities and discrimination among race, and the right to breathe without a knee to the neck.

REIMAGINING THE NARRATIVE: A RACE FOR REPARATIONS

The Reparations fabric art scroll includes an experimental erasure of the Henrietta Wood case, along with the stream of consciousness, A Race for Reparations, that responds to the narratives of slavery and the need for reconciliation and reparations to an entire race.

REIMAGINING THE NARRATIVE… PANDEMIC DIARIES: AN OUTBREAK OF RACISM

The Pandemic Diaries: An Outbreak of [Racism] fabric book scrolls exhibit a timeline of the Covid-19 pandemic from the perspective of racism. The book consists of volumes, and each volume can be hung as a scroll or attached together as one book. The viewer is invited to immerse themselves in the work and experience an exercise in reimagining the narrative through what they see, and what they do not see.

The “Hands United for Pride” Community Art Scroll aims to change the narrative of discrimination for the LGBTQ community by bringing together the diverse Full Sail community to stand together in support of Pride.  Full Sail University students and employees from ten departments across the campus, including Full Sail President, Garry Jones, trace their hands to join one another in support for Pride.  Each hand, individually traced directly on fabric or uniquely traced on paper and then printed onto fabric, is submitted electronically or by drop-off during the continued pandemic. Each hand is stitched and layered together with the others along with the stream of consciousness. In this stream of consciousness response, Jefferies reflects on the imperfection of the traced lines, representing each of our identities, “imperfect and unique.”  In cutting around the lines, Jefferies contemplates the significance of the curves captured by the pen around several rings on some of the hands.  These rings offer a story that we cannot see or know, but often represents the love for another, “any other.” 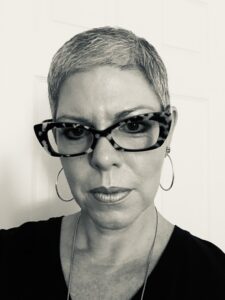